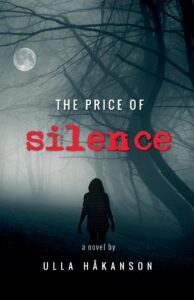 The Price of Silence

Trying to put an abusive relationship behind her, Amy Robinson joins her cousin on a kayaking trip into the wilderness of British Columbia. Together, she and her fellow kayakers bond as they face the thrill of rapids, unpredictable weather, and hungry bears.

But Amy faces a greater danger, and it has nothing to do with nature. Her ex-fiancé Tyler has followed her from Vancouver, on the run from drug gangs and desperate for cash- cash Amy has painstakingly saved for her expanding beauty-salon business.

Luckily for Amy, one of her new friends is a cop. And although she’s wary of his affection at first, Amy is gradually drawn to police detective Ben Malik.

But Tyler lures Amy away from the safety of her companions and into an ugly underworld. If the ruthless thugs chasing him catch Amy instead, she’ll face torture and almost certain death. Will her wits and bravery be enough to keep her safe while Ben struggles to pin down not only Tyler, but the gang chasing them both?