There’s more to writing a good thriller scene than technical know-how – though that is also important. To write truly nail-biting scenes, you must understand how to create suspense and tension. For a good reason, Thriller novels are some of the most popular books. They are exciting, suspenseful, and full of surprises. So if you want to create a thrilling scene for your novel, then make sure to follow these tips and tricks!

More than anything, creating a great opening scene means that you understand what your story is truly about. If you can figure out the premise or main conflict of your story, you’ll be able to craft an opening scene that will captivate your readers and leave them wanting more.

First and foremost, you’ll want to ensure your opening sentence is solid and attention-grabbing. After all, the first sentence of your scene will pull your readers in and make them want to keep reading.

Here are a few great examples of opening sentences from popular thrillers:

“The clip-clop of horse hooves echoed like a death knell through the fog.”

“At first, I thought it was the wind howling, but then I realized it was laughter.”

The Girl on the Train by Paula Hawkins:

The Girl with the Dragon Tattoo by Stieg Larsson:

“She was not human. She differed from human beings in almost every respect.”

This opening sentence immediately creates a sense of mystery and something dark and different about Lisbeth Salander’s protagonist.

“When I think of my wife, I always think of her head.”

A chilling opening line gives us a glimpse into how the protagonist, Nick Dunne, feels about his wife. And things only get more intense from there.

“All descriptions of this novel’s artwork, architecture, documents and secret rituals are accurate.”

This line tells readers they’re in for a wild ride full of historical facts and conspiracies. And it delivers.

As you can see, opening scenes in thrillers are often dark and mysterious and set the tone for what’s to come.

Think about what’s at stake: There is always something at stake in a thriller. Whether it’s world peace or the life of a loved one, the stakes must be high.

Using the scene structure or story structure of creating a beginning, a middle, and the end, one way to gradually create tension in a scene is to reveal details about it. Let’s say your scene starts with the police questioning a character.

You could start by describing the setting:

Amy peeked into the buzzing command centre across the hallway as she waited for her turn outside the police detective’s office. The centre was all lit up in fluorescent light. Police officers, some in uniform and some in shirtsleeves and loosened ties, were moving about, working on computers, talking on the phone, arguing. The countless desks in the room were cluttered with papers and files. A row of video screens covering the wall on the opposite side of the room showed maps of city areas, analysis mapping, surveillance, and security.

In the next scene, you could introduce the characters:

“Amy Robinson?” Amy jerked as a policeman with white hair, a hooked nose, and a face like weathered buckskin came up to her and introduced himself as Constable Krucik. He gestured for her to follow him into his office. He told her to take a seat, closed the door and sat down behind his desk. He picked a file on top of many and opened it. “Let’s see what we have here,” he said and started to read. Amy tried to ignore the tension growing in her body when she saw his thick eyebrows collide. He’s caught me.

And finally, you’d want to reveal what’s happening as the scene ends:

“Hmm,” Constable Krucik said. “Can you think of anyone specific who could have broken into your apartment?”

Amy picked some invisible lint off her pants, pretending to think about it. She shook her head. “No.” Her ears were getting hot. I should’ve left my hair down.

Krucik looked up from the report. “Are you sure about that?” he asked with a hawkish gaze.

Alarmed, Amy stopped fidgeting with her hands, looked up at his weathered face, and saw doubt. She was screwing up. Say something. “I’ve never been questioned by a policeman before. It’s making me nervous.”

He fingered a birthmark on his forehead for a moment as if thinking it over. “All right,” he said and returned to the report. “Our concern is that blood was found in the apartment.”

“Fingerprints were lifted from around the apartment,” he continued. “If you don’t mind, we’d like to take your prints for elimination.”. . .

By withholding information from the reader, you’re creating scenes of suspense and tension. Whatever technique you choose, keep the reader engaged by constantly adding new information. Don’t let the scene drag, and don’t give away all the answers at once. Instead, tease the reader with small clues that will slowly unravel as the scene progresses.

Yet another way to create tension is to focus on the characters’ emotions, on the character’s fear and anguish. This will make the reader feel anxious and tense while waiting for what will happen.

Use strong verbs and adjectives to create a vivid picture 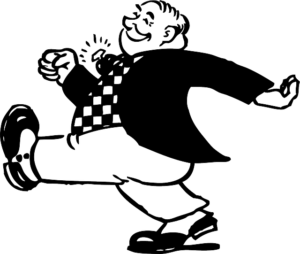 Strong verbs and adjectives create a high-intensity atmosphere that engages the reader in the thriller. In the beginning, they set up expectations for what is to come. In the middle, they keep the tension high. And in the end, they bring resolution to the story.

Strong verbs and adjectives can create a vivid picture. For example, rather than saying someone ‘walked into the room,’ you could say they ‘strode into the room,’ or ‘sauntered in.’ Instead of saying “She was angry,” you could say, “She was furious,” which immediately gives the reader a stronger sense of what’s happening.

You can use adjectives to significant effect in setting the scene. Is the room dimly lit or blazing with light? Is it cramped or spacious? Using precise language brings the scene to life for your reader.

John was walking down the street when he saw a giant, furry creature lurking in the shadows. The beast had beady eyes that gleamed in the darkness, making strange grunting noises. John’s heart raced as he slowly backed away from the creature, not taking his eyes off it for a moment. Then, finally, he turned and bolted out of there as fast as he could.

In this scene, John is faced with something frightening and unknown. Again, the strong verbs and adjectives help paint a picture of the creature and the situation, making it more suspenseful and exciting.

Of course, this is just one small part of creating a compelling scene. It would help if you also considered dialogue, pacing, and description. But if you can get the little details right, it will go a long way towards making your scene more powerful.

Make sure each character has a clear role in the scene 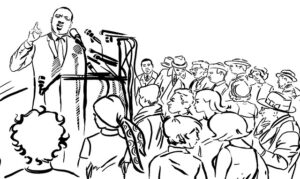 Scenes in a story should be tightly focused and purposeful, with each character having a specific role to play. One way to ensure each character contributes effectively is to give each character a particular goal for the scene, which can help keep everyone on track and move the story forward.

Use a checklist to ensure each character has a clear role in a scene. For example:

-Make sure each character has a specific goal or objective for the scene.

-Make sure each character has something to say or do that advances the plot.

-Make sure each character interacts with the other characters in meaningful ways.

-Avoid having too many characters in a scene at once, which can confuse readers.

– Make sure each character has their point of view, which will help ensure they act as individuals rather than just cogs in the machine.

– Make sure each character’s dialogue reflects their personality and backstory, which will help the reader understand who they are and what they’re doing in the scene.

When writing a scene, there are a few key things to keep in mind to keep the action moving forward without bogging down the narrative.

First and foremost, you want to ensure that each scene has a purpose. What is the point of this scene? What goal is moving the story forward? Once you have decided the purpose, you can start thinking about what needs to happen in this scene.

How can you keep the reader engaged while still conveying all necessary information? A good trick is to focus on dialogue and action. Too much description can start to drag a scene down, but if you keep things moving with sharp dialogue and swift action, your readers will be more likely to stay engaged.

Here are a few tips:

– Make sure your scene has a purpose. Every element should contribute to furthering the story.

– Keep the action moving by cutting out any unnecessary moments or dialogue.

– Keep things visual by showing instead of telling.

– Make sure your characters have operational goals that propel the scene forward.

– Use conflict and tension to keep readers engaged.

– Be mindful of pacing and how your scene fits into the larger story.

Use dialogue to reveal character motivations and advance the plot

First, consider what your goal is for the scene. What do you need to accomplish? Are you trying to advance the plot? Reveal character motivations? Introduce a new element of the story? Once you know your goal, you can start thinking about how to achieve it.

Second, make sure all of your characters are involved in the scene. Even if one character is only there for a brief conversation, their interactions with the other characters will contribute to the scene.

One way to reveal character motivation is through exposition – having the character explain their motives directly to another character or the reader/viewer.

Another way is to show the character’s actions and how those actions reveal their inner thoughts and feelings. For example, if a character constantly looks at their watch, they might be impatient or anxious.

By following these tips, you can create suspenseful and compelling scenes that will keep your readers hooked until the end.

By establishing a strong sense of place and using vivid language, you can immerse your readers in the story and draw them into the action.

Make sure each character has a clear role in the scene and use dialogue to reveal their motivations and advance the plot.

Contact us below if you’re looking for more help with your writing. We’re there for you. As always, happy writing!

How long should a thriller novel be? Many writers struggle with this question. Unfortunately, there is no easy answer. The length of your book will depend on various factors, including […]