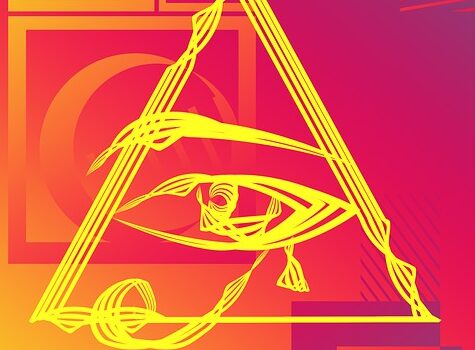 This blog post will discuss the third person omniscient point of view. This pov is less common than the other two, but you can use it significantly in thriller writing. It gives the writer a God’s-eye view of the story and allows them to explore all the characters’ thoughts and feelings. Let’s take a closer look at this point of view and see how it works!

The third person omniscient narration is a point of view in which the narrator knows everything about the story’s characters, including their thoughts, feelings, and motivations. The third person omniscient narrator is often seen as all-knowing and all-seeing. They are not a part of the story, but they have access to information that the characters do not.

In Agatha Christie’s And Then There Were None, the third-person omniscient narrator knows all the characters’ thoughts and feelings. As a result, we are privy to their innermost thoughts and fears as the story unfolds. This point of view creates a sense of suspense and allows us to see the events from multiple perspectives.

Narrative distance and how it affects readers 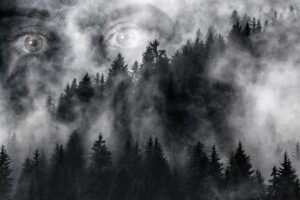 One of the things that can be tricky with the third-person omniscient point of view is maintaining narrative distance, which means the distance between the narrator and the characters in the story. With too much space, readers may feel they are being told what to think or how to feel about the characters.

In Margaret Atwood’s novel, The Handmaid’s Tale the narrator is a disembodied voice who relates the story of Offred, a handmaid living in a dystopian society.

On the other hand, if there is not enough distance, readers may feel like they are inside the heads of the characters, and it can be challenging to understand what is happening in the story.

In the novel The Catcher in the Rye by J.D. Salinger, Holden Caulfield, the narrator, tells his story in first person and often breaks the fourth wall to address the reader directly.

This blurring of the lines between narrator and character allows readers to get inside Holden’s head and see the world through his eyes, which can be both entertaining and frustrating.

On one hand, it’s fascinating to get such a detailed view of Holden’s thoughts and emotions; on the other hand, because Holden is not always reliable or rational, it can be difficult to trust what he says.

The key is to find a balance that allows readers to feel engaged with the story without feeling like they are being spoon-fed information.

The third person omniscient point of view can be an excellent tool for creating suspense and tension in a story. You can also use it to give readers a more objective look at the events unfolding.

An omniscient narrator can provide readers with detailed insights on what is happening in a country by describing the thoughts and feelings of the different characters involved. This can help readers to better understand the complexities of the situation and to develop a more nuanced understanding of the events taking place.

Additionally, an omniscient narrator can also offer an objective perspective on the events, which can be helpful for readers who are trying to make sense of a situation that is complicated or difficult to understand. 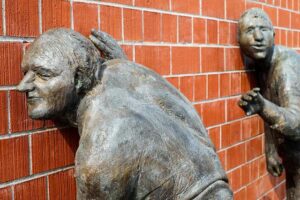 In J.D. Salinger’s The Catcher in the Rye, the narrator uses the first person plural pronoun “we” to refer to human beings in general. This use of “we” creates a distance between the narrator and readers and allows the narrator to be more objective.

In another example, Margaret Atwood’s The Handmaid’s Tale uses the pronoun “I” sparingly, which creates a sense of intimacy and immediacy for readers. In addition, using first person pronouns sparingly, Atwood can create a more distanced and objective third person omniscient narrator.

You can use the third person omniscient point of view in any genre, but it is often used in thrillers because it allows the author to create suspense by withholding information from the reader.

One famous example of a third person omniscient point of view is the novel The Girl on the Train by Paula Hawkins.

This novel’s narrator knows more than just the main character, Rachel. The narrator also knows about other characters like Anna and Megan, which allows the author to create suspense by withholding information from the reader.

While the third-person omniscient point of view does have its challenges, you can also use it to create rich and complex characters.

In a thriller, for example, the third-person omniscient narrator can give readers access to multiple characters’ inner thoughts and motivations, making for a more suspenseful and thrilling story. 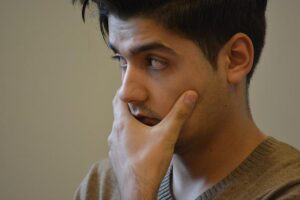 Let’s look at some example passages to give you a better idea of how you can use the third person omniscient point of view in a thriller.

The first example comes from Dan Brown’s novel, The Da Vinci Code. In this passage, the third-person omniscient narrator gives readers access to the thoughts of both Robert Langdon and Sophie Neveu:

– Langdon felt a sudden surge of hope. Maybe Sophie was right. Perhaps this was all just a huge misunderstanding. He turned to her, about to speak, when he saw the look in her eyes. She had seen it too.

– He was going to have to get rid of her. Amy Dunne had become a gigantic problem. Nick did not know it yet, but Amy was plotting his demise.

In the following example from Dan Brown’s Angels and Demons, the third person omniscient narrator tells us about a character’s thoughts, even though the other characters in the scene are not aware of them:

– As he entered the room, Langdon could sense an almost palpable tension in the air. The four men around the conference table regarded him with guarded eyes, their expressions revealing a range of emotions from curiosity to hostility. One of the men, however, seemed more nervous than the others. Langdon could see beads of sweat on his forehead, and he was fidgeting incessantly with his cuff links.

You can find the third person omniscient point of view in many different genres, but it is most commonly used in thrillers. One more example:

– Though she couldn’t see it, she could feel his eyes on her. She tried to continue painting the fence, but found herself growing more and more agitated the longer he watched her. Finally, she put down the paintbrush and turned to face him. “What do you want?” she asked impatiently.

He hesitated for a moment before answering. “I just wanted to say hello,” he said finally. “It’s been a while since we’ve seen each other.”

“Hello,” she muttered before turning back around and resuming her work. She could feel his eyes on her still, but she refused to look at him again.

An omniscient narrator is all-knowing

This means that you, as the writer, need to know everything about your story and characters. You can’t hold back information from the reader, as they will be able to tell.

Doing so would likely bore your readers. Instead, you need to be strategic about when and how you reveal information.

An omniscient narrator is not impartial

This means you can have your narrator share their opinion on the story’s events and the characters’ actions.

They should still react to events as they occur, just like any other human would.

Third person omniscient can be tricky to master, but it can also be gratifying. It can give your readers a unique and all-encompassing experience when done well. Just be sure to use this point of view sparingly, as it can quickly become overwhelming and confusing if overused.

There are pros and cons to using the third-person omniscient point of view in thrillers. On the one hand, it allows you as the writer to include a lot of information and details in your story.

On the other hand, it can be challenging to maintain suspense when the reader knows as much as the omniscient narrator.

Ultimately, it’s up to you as the writer to decide whether or not the third-person omniscient point of view is right for your thriller.

If you do decide to use it, be sure to keep the above concerns in mind.

The third-person omniscient point of view is a powerful tool in your writing arsenal. It allows you to create suspense, tension and intrigue by developing your characters fully and giving the reader access to their thoughts and feelings. You can use this point of view to significantly affect thrillers, mysteries and any other genre where you want to keep the reader guessing about what will happen next.

So if you’re looking for a way to add depth and complexity to your writing, give the third-person omniscient point of view a try.