A synopsis is what publishers use to decide what books they want to publish. If you are an author, this is what will help get your book published.

A synopsis should be between 1-2 single-spaced pages long. It should be written in present tense and in third person. It should include the following: who the target audience for the book is, what problem it solves, what need does it fill? How does it do that? What’s at stake if things don’t work out?

In this blog post, you will learn the seven steps required to write a great synopsis for your thriller.

1. What is the protagonist’s goal and how does he/she achieve it in the end?

Your synopsis needs to make clear what the protagonist’s goal is and what they have to do to succeed.

Include what obstacles are standing in their way, what makes it difficult for them to achieve success, what kind of a struggle does our hero go through? How long has he/she been struggling with this problem? What other problems arise along the way that your protagonist must solve?

The protagonist – let’s call her Jennifer – left an abusive relationship to start a new life with her own beauty salon business to support her. She has a troubled relationship with her parents as well, knows that she has to do something about it, and sets a goal to change her relationship values, both romantic and familial. Now she’s looking forward to a kayaking trip in the BC wilderness with a group of friends.

2. The setting of your story

The next element in your synopsis is the setting of your story.

What is the time period?

From August to September 2018.

Where does it take place?

In these parts of BC: Vancouver, Bowron Lake Park, the wilderness of central BC, Richmond.

What type of places are there?

The protagonist has an apartment in the ritzy Kitsilano area of Vancouver.

An abandoned cabin in a secluded part of interior BC.

A small, simple house in a poor area of Richmond.

3. A description of the antagonist or villain

Once you have defined the protagonist and the setting, it’s time to focus on what makes them struggle. Who are they up against? What kind of a person or entity is causing the trouble for our protagonist?

You must describe what type of villain it is, what do they look like and what kind of personality does this individual have? What methods do they use to try and defeat the protagonist?

-The villain is a tall, good-looking white man with dark, longish hair tied in a ponytail. He dresses in black leather from top to toe. He can be utterly charming when he wants to, or manipulating, intimidating, and dangerous when things don’t go his way.

When Jennifer first meets the villain, a well-dressed, good-looking man entering her beauty salon asking if he could have a haircut without an appointment. He makes her heart skip with his charm, his baritone voice, and light friendly smile. Little does she know that using his charm is only one of the methods he uses to get what he wants. She soon learns that if she doesn’t comply, he swiftly turns to violence. After a beating that sends her to the hospital, she finally leaves him.

4. What are some specific scenes from your book that will make readers’ jaws drop (or cry)?

You need to include some specific scenes that will grab the reader’s attention and make them want to know what happens next.

Half way to Bowron Park, Jennifer and her cousin Mika checks in to a Motel, then go out for a late dinner with wine. Walking back to the motel, Mika wants to know why Jennifer and her ex broke up.

Jennifer hasn’t told anyone in her family about her abusive relationship. Fortified with wine, she tells Mika about her life with her ex … how he slapped her and pushed her around – once with a cigarette in his hand, pushing the cigarette into her bare shoulder.

She talks about the pain, how her ex was running around in circles trying to figure out what to do. That she kept telling him she wanted to go to the hospital, but he wouldn’t hear of it as he ran back and forth like a jackrabbit, washing the burn, getting bandages, bringing her water, painkillers…

Jennifer covers her face with her hands and continues her story with her voice full of tears … about how he kept pouring wine for her while spinning a spiel about being sorry. She calls it his Oscar-worthy performance that she didn’t know how to deal with, that all she could do was sit there with her shoulder throbbing from the burn, her face stinging from his slaps, wishing he would stop.

Mika puts her arm around her. Jennifer pulls away and stomps her foot on the ground, cursing her own weakness saying she swallowed it all; the painkillers, the booze, the acting. She turns away and whispers that they made up in bed.

Mika is crying, saying she wished Jennifer had called her. Jennifer looks at her in disbelief and repeats that they had made up in bed. That she had been too embarrassed to tell anyone, that in fact, she is embarrassed right now to be telling her.

Meanwhile, unbeknownst to Jennifer, the villain has made enemies with members of a Vancouver drug gang and is hiding out in an abandoned cabin in the interior BC. He needs to disappear. For that, he needs cash to get out of the country and is plotting to make Amy give it to him. He finds out where she is and sets an elaborate trap. Three days later, he lures her away from her friends, abducts her at gunpoint and forces her to empty her business bank account. Before leaving her in the woods, he warns her not to talk about this to anyone, or the thugs chasing him will come after her.

5. Who is your target audience and what do they want to see in a thriller novel?

Publishers always want to know what the target audience for the book is. Your synopsis should identify who the book is aimed at and what they would get out of reading it.

Thriller books appeal to a wide range of readers but have their highest readership among those in their 30s and 40s. The predominance of a female point of view in their early forties means that there is a slightly higher appeal to women in their late thirties to early forties. However, your book will, in fact, appeal to a wide range of readers, and appealing to one demographic does not necessarily exclude others. Thriller readers are looking to experience a sense of excitement and the satisfaction of a fear or challenge overcome and are more likely to read those books in a couple, longer sittings rather than through little bits at a time.

6. Tie up all loose ends with a satisfying conclusion, but leave readers wanting more! 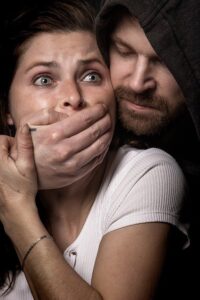 Make sure that you don’t give away the store when it comes to what happens in the book’s conclusion. Your synopsis should leave readers thinking, “I want more!” rather than feeling like they’ve already read what is essentially a condensed version of your story.

In Jennifer’s case, maybe meeting a new man on her kayaking trip (a police detective) makes her less cautious, forgetting the warning from her ex not to tell anyone about him, or the thugs chasing him would come after her.

When she tells her police friend about her ex, he realizes the danger she’s in. But before he can arrange for her protection, the thugs abduct Jennifer. She endures harsh treatment by her abductors who believe she knows where her ex is hiding.

Bound and gagged in a dark room, she listens to them talking in another room, memorizing their words and voices. Three days later, she’s taken away in a car to be disposed of. She manages to escape from the car and hide until her police friend and his team find her and takes her to the hospital.

There awaits more trouble for Jennifer to overcome. But she survives to tell about it in grand style. She makes peace with her parents, marries her police friend and they live happily ever after. 7. How can you show off your writing skills with this story?

Remember that your synopsis will act as a showcase for your writing. Think about what makes your novel compelling and what you want to get across about the story.

There are so many wonderful books, talks, lessons, and mentors to learn from. Here are a few:

Stephen King’s book “On Writing: A Memoir of the Craft” describing his experiences as a writer and his advice for aspiring writers has been a treasure for me since I started to write in 2010.

On YouTube: Neil Gaiman’s instruction to Make Good Art in his Address to the University of the Arts Class of 2012 is wonderfully inspirational and worth listening to more than once.

If you want to adapt your book or idea for Hollywood, I recommend John Robert Marlow’s book “Make Your Story A Movie.”

Try to find a mentor, your ideal reader, someone who loves to read – especially books in your genre – likes to discuss books, and most importantly someone you can trust to tell the truth.

If you’re planning to write a sequel, make sure you leave with a cliffhanger or a comment saying something like: “If you want to find out what happens next, the sequel will launch the first of December”… or something more inventive like that 🙂

I hope the information in this blog will inspire you to write an exciting synopsis that will make your book fly off the shelves.

No protagonist is the same. They all have their own unique personality that helps define the story they’re in. When readers read your thriller novel, they need to be able […]